My daughter tells me, “Daddy, seven ate nine.” In fact though, it’s the contrary.

Yes, you just upgraded to Drupal 8, but that’s how math works. Luckily, the shift from Drupal 8 to Drupal 9 should be of great ease for most organizations.

Even though tools were built in to have the upgrade from Drupal 6 or 7 to Drupal 8 (top ranked Drupal website examples) run as seamlessly as could be, it still might be an arduous ordeal. Drupal 8 marked a seismic shift for the Drupal world — introducing major new dependencies like Symfony and a bevy of new features in Core. This updated software made it a chore to upgrade sites in the first place, complicated further by the long wait for a number of modules to be properly optimized and secured for the new version.

Drupal 9: Now is What Comes Next

Thankfully, the multitude of changes made to the platform in Drupal 8 have made it simple to build, grow and upgrade for the future. The new software has been designed specifically to have a breezy transition between Drupal 8 and Drupal 9, so that migration requires little more than upgrading between minor versions of Drupal 8. In fact, as Dries Buytaert (the founder and project lead of Drupal) shared recently in a blog on Drupal.org:

With more news and timelines issued about the new features and updates in Drupal 9, organizations should consult their digital needs and how the new platform will fit them. No matter your plans feature-wise, your organization should plan to upgrade to Drupal 9 no later than the summer of 2021. The reason being, the projected end-of-life for Drupal 8 software is November of 2021, when Symfony 3 (Drupal 8’s largest major dependency) will no longer be supported by its own community. 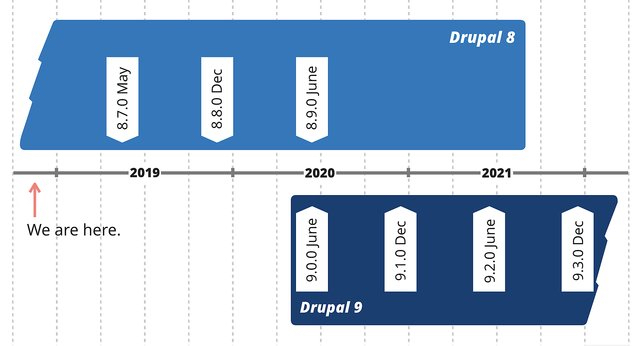 In the interim, the best prep for the launch of Drupal 9 is to ensure that your Drupal 8 site is fully up to date. For guidance with your Drupal future, and locking in that you’ll have a painless upgrade to Drupal 9 when it releases, contact WDG. We’re here to plan out your long-term Drupal strategy so that your team can maximize your site for now and the future.

Upgrade from Drupal 7 to Drupal 9

Association Websites Are More Important Than Ever