A few times a year, an event captures the attention of The Web Development Group Team, and we feel compelled to either sponsor or participate. When the Domestic Violence Hackathon came across our radar, we were excited to participate both as developers and as a sponsor. Not all of our team was able to attend the event but two of our WordPress Developers were there bright and early both days of the event.

The WDG representatives, Mike and Vajaah, came together with a few other developers to build a domestic violence database. Like any good web developer, Mike and Vajaah identified a problem, developed a solution, and then put the solution in to motion. The problem they found was that although there are a lot of support organizations that help with domestic violence (shelters, legal teams, etc.) there does not appear to be a universal database of all the support groups. There are currently databases for specific regions or for similar organizations, but Mike and Vajaah wanted to build a universal database that contains all the resources available. 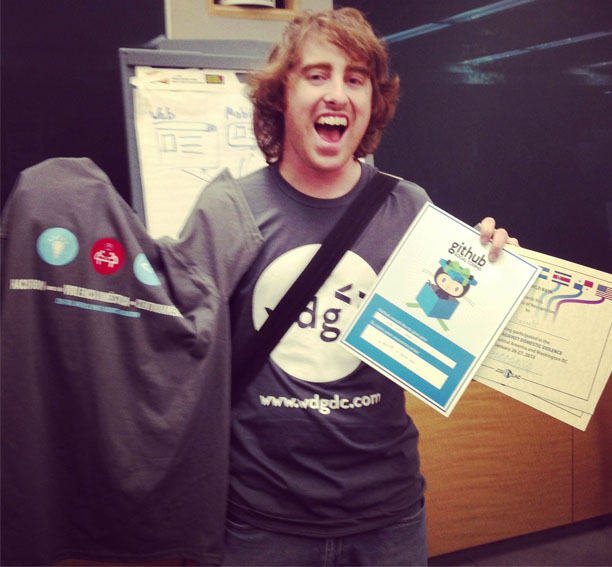 During the hackathon, Vajaah and Mike successfully built the major component of this database and now developers from all over are able to continue building the system. There are two different levels of access to the database. The first is for the public and it allows them to search the listings. The second is for developers. Using REST, certain developers will have access to the backend of the database and will be able to continue to build on the project started by Vajaah and Mike. Prior to finishing the project, Vajaah and Mike collected the census data and added 2,000 records to the database from all 50 states.

The project was a huge success, in fact it got 3rd place! Vajaah and Mike also worked with Cindy from the National Network to End Domestic Violence and Diana from George Washington University. The World Bank has expressed interest in seeing this project move forward.

Know of any upcoming events we should sponsor or participate in? Let us know! We try to remain as active as possible in the DC design and development world. If you are interested in learning how we can help you with your next WordPress or Drupal project, get in touch! Our DC WordPress developers work on projects of all sizes. We are located in Alexandria, VA but work on web design projects in Virginia, DC, Maryland, and North Carolina. Get in touch with us today!

When Bigger isn’t Better: The Death of the Giant Agency

Preparing Your CMS for Drupal 9