Trusted Nuclear Power to the World

Centrus Energy is a trusted supplier of enriched uranium fuel for commercial nuclear power plants in the United States and around the world, and plays a critical role in areas such as fueling commercial nuclear reactors, supporting U.S. national security, and providing advanced manufacturing and engineering capabilities. Centrus has been providing energy services since 1998, but as the energy industry expands and differentiates, Centrus Energy reached out to The Web Development Group, to provide web design and implementation of a new site that would reflect the company’s updated trade engagement.

Centrus Energy looked to have a straightforward and simplistic site design, used as a platform by which the company could illustrate the newsworthiness of the field, their extensive history, and the company mission and goals. Because Centrus placed value in a site design that utilized plentiful photos and videos, The Web Development Group was sought out for this project due to our superiority in depicting powerful concepts, while maintaining a balance and sensitivity with complex industries. Additionally, Centrus required the ability to make considerable updates and page additions in the future, as well as consistent updates to their news portal, and thus required an implementation partnership, and the creation of customizable templates, on an easy-to-use platform. WordPress was consequently selected as the CMS platform, which would offer the Centrus team ability to make updates and changes via a browser-based dashboard.

To accomplish Centrus’ needs and goals, The Web Development Team of designers first crafted a home page design that focused on news and updates, history and company mission. Our designers crafted an eye-catching layout that incorporated featured articles, pulled from the site’s new “News and Updates” page, an emotive display of the company’s mission plus an “about us” snippet, and an interactive horizontal, scrolling timeline of Centrus’ history.

When it came to tackling interior site pages, The Web Development Group implementation team built user-friendly template pages, loaded with interchangeable landscapes and selectable features. The template was built using Advanced Custom Fields implementation (ACF), as well as flexible content layouts. This gave Centrus the ability to make significant customization to each page as they input the content, such as column orientation, page structure, rotating header images, body images and background selection, and the addition of slideshows and videos. The WDG dev team also customized the face of template editors to offer a visual style guide, so that Centurs administrators could see, almost exactly, what the published page they were working on would look like, as they made changes in the editor.

Furthermore, the Centrus team would routinely use the custom template editor and browser-based dashboard to consistently update their “news and updates” portal. Mimicking a traditional blog layout, the News and Updates page was designed to highlight one feature story, with subsidiary stories and updates below. The WDG development team customized an editor feature to offer facet selection and tagging, so Centrus staff could categorize content by “news releases,” “photo gallery,” and “update and perspectives,” in addition to identifying the year published. This featured allows Centrus staff to organize the News and Updates matter, and conversely, offer site users the ability to filter the information by facet and date, to best return desired and relative content. 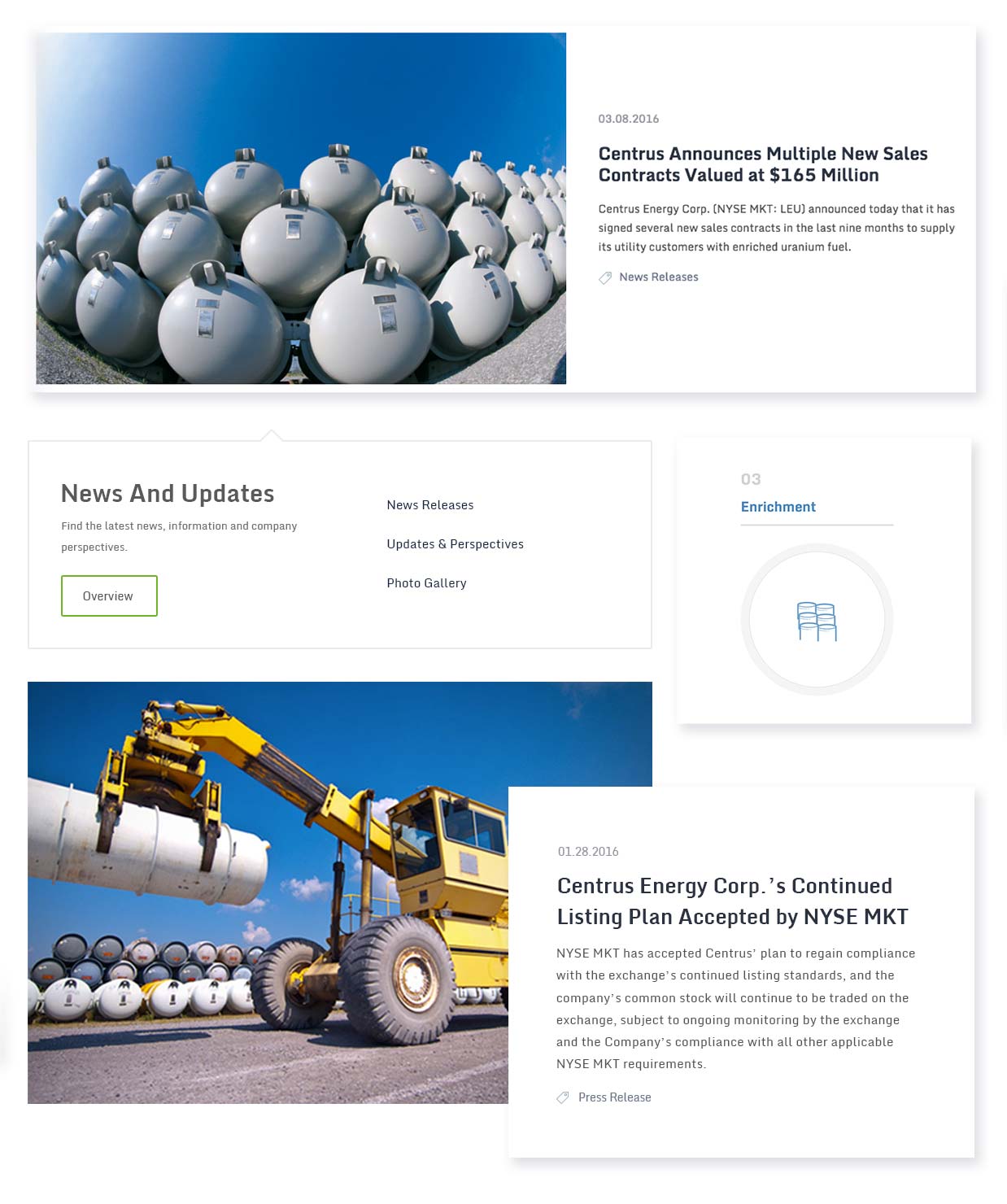 Creating customizable templates for the Centrus team to implement in-house offered a wealth of benefits to this project, however, the drawback is in the search functionality. The default WordPress search function is set to crawl through the content of a site’s pages, to return related results. However, by using default settings and instead utilizing the “flexible content” and “Advanced Custom Fields implementation,” associated with the custom templates, it essentially puts all content out of reach to the WordPress built-in search function. In other words, if a custom search tool is not also rooted, users will never receive relevant search results, if any at all. So, the WDG development team created a one-of-a-kind search feature that was built to comb through the unique template and unstandardized layout.

One of main challenges presented to the WDG design team, was finding positive images and artwork related to the nuclear energy industry that could illustrate Centrus’ work. Centrus put an emphasis on the fashioning a visual representation of their work, however, after kick-starting design, the WDG team quickly discovered that the stock images, icons, videos and artwork available either depicted purely negative images on the nuclear field, or, did not properly exemplify the breadth of reach that Centrus Energy spans in the industry. To combat this, The Web Development Group coordinated with the Centrus team to capture and provide custom photos, so as not to relay on the availability of stock images. Additionally, the design team created custom icons to depict the nuclear fuel cycle, which was quite the challenge, as creating a visual representation of such concepts as “fuel fabrication” or “mining & milling,” is not the most obvious task. To smoothly display the collection of photos captured, slider galleries were implemented throughout the site. These galleries were designed to be interactive, where site visitors could scroll through photos as they are on the page, or, click to open up an expanded gallery, where users could zoom, view in full-screen, social share or download. Additionally, the gallery was implemented to be mobile responsive, so users on a smartphone or tablet could accomplish the same viewing options with the touch of their finger.

An interesting feature built into the image display and galleries by The Web Development Group implementation team, was the use of color placeholders. With this feature, if an image is loading slowly, instead of displaying a broken image link or a blank box, the image block displays a color, which is set to reflect the “average color” from the intended photo. This lends users the idea that something is coming. Such tactic is utilized by sites with heavy imagery, like Pinterest, and is a well-received way to offset sluggish load time as a result of a poor network or connection.

Another focus for the Centrus Energy redesign was the implementation of a new navigation structure. As determined by the initial strategy working sessions, in addition to Centrus’ call for a simplistic structure, an adaptive, custom mega menu was created. The design of the menu featured three principal tabs, with a drop down interface that is triggered by hovering over the visible menu options. Tiered supplementary pages and further related content is revealed, as are Calls to Action and associated pages under the main mega-panel. Implementing such solutions created a modernized structure and navigation interface, offering users an accommodating experience and uncomplicated path to their desired page. The menu was created to be not only be adaptive on a mobile device or tablet, taking a vertical form opposed to the horizontal desktop version, but in addition, the desktop menu is adaptive as well. As site visitors scroll down a page, the menu compresses and shrinks in size, to allow more content to fit “above the fold.”